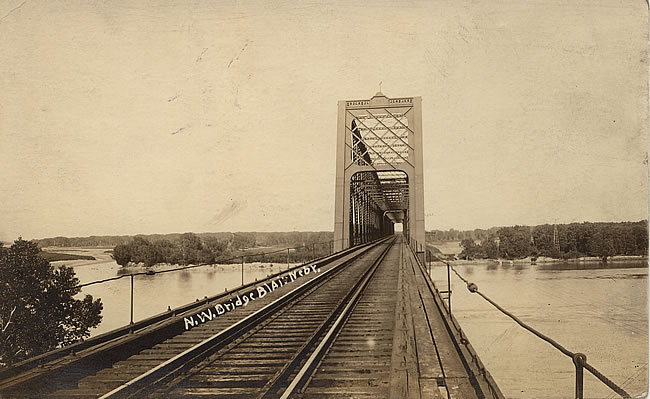 The early railroad service in Blair dates back to February of 1869 when the Sioux City & Pacific Railroad finished a line from the Missouri River at Blair west to Fremont. Train cars were hauled across the river by steam ferry maintained by the railroad in the summer months. In the extreme cold of the winter, tracks were lay on top of the frozen river ice.  The locomotive would bring the train to the river and then turn around, using the round house in Blair, for a return trip.  On the other side of the river a new locomotive was waiting. Both the ferry and ice bridge modes were slow and unreliable.

Around the same time, the rail line stretch north from Omaha to De Soto (just south of Blair.)  Then on October 7, 1871, the road was completed to Herman, on the line of Washington and Burt Counties, with the prospect of extending a branch by way of Logan Creek and Elkhorn Valley to the mouth of the Niobrara.

In 1881, as plans developed to build a bridge across the river, the town started to experience a building boom. Major buildings such as the Blair National Bank Building & Mayle/Hungate Building were two of the first to establish Washington Street as the main business district.

Railroads   — from Johnson’s History of Nebraska, 1880

The Omaha & Northern Nebraska Railroad runs through the County from south to north, passing up the Missouri Valley. Length of road in the County, 24.47 miles.

The Sioux City & Pacific Railroad, connecting with the Union Pacific at Fremont, in Dodge County, runs through the central portion of this County, from east to west, a distance of 19.60 miles.

Rebuilding the Train Bridge
Pictured here is the new railroad bridge under construction.  The spans on the right were the old bridge.  On the left is a new section.  Note the engine crossing on this section.

Replacement:  “Morrison’s Whipple trusses at Blair had been replaced in 1924 with Parker trusses fabricated by the American   Bridge Company in New York.” ALM Bridge page 24

Already the ferry had shuttled automobiles cross in the Missouri, make the B-line cutoff through Blair a more direct route for the old Lincoln Highway and later Highway 30. 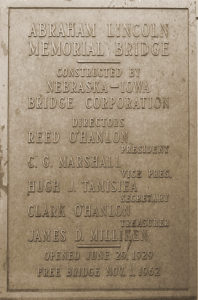 In 1928 and 1929, a new bridge was built across the Missouri, near the C&NW railroad by Blair, Nebraska. US 30 was re-aligned to this bridge in 1931, after a road was built between Missouri Valley, Iowa and the new bridge. The bypass north of Omaha saved forty miles between Missouri Valley and Fremont, NE. The bridge was named the “Abraham Lincoln Memorial Bridge” although the road was no longer officially the Lincoln Highway. Dedicated July 26, 1929