The town of Blair, Nebraska was laid out by John I. Blair, president of the Sioux City & Pacific Railroad, in early 1869 on land he acquired during construction of the railroad. The first lots were sold at auction on March 10th of that year with the town growing rapidly during the ensuing summer and fall, providing a steady increase in population. The first railroad actually arrived before there was a town when the Northern Nebraska Air Line, organized in 1864 to build from DeSoto to Fremont, built their line north from DeSoto the five or so miles to the future site of Blair in 1867. Known locally as “The Plug,” it was sold to John Blair in 1868 with the track taken up a couple of years later without ever being used.

The Sioux City & Pacific built the first depot at Blair on the north side of the tracks near the center of town about the time the railroad was completed in February 1869. Scott Bryan was the agent. A two block long park with trees was maintained by the railroad opposite the depot between the south side of the tracks and Front Street. It became a popular gathering place for civic events such as Fourth of July celebrations. A small roundhouse, turntable, water tank, and fueling facilities to service locomotives assigned to the west side of the river was located north of the main track in the east part of town.

A third railroad reached Blair in late 1870 when the Omaha & North Western built into town from Omaha. A daily except Sunday mixed train began operation over this line on February 6, 1871, making connections with the SC&P train to Fremont. The O&NW crossed the SC&P here to continue on north, reaching Herman in 1872 and Covington opposite Sioux City as part of the Chicago, St. Paul, Minneapolis & Omaha Railway in 1880.

The first merchants in Blair were a dry goods store and a grocery and hardware store. The Register, a weekly newspaper, was established in 1869 followed by the Blair Times in 1870. With railroads running north and south and cast and west, the town became something of a crossroads, both for travel and as a supply base for the surrounding area. By the mid1870s there was a good variety of merchants selling all manner of goods and equipment, plus two flour mills. Education was not neglected either with a new three story brick high school erected in 1872. In 1869 Blair became the county seat of Washington County, taking over a square brick building originally intended as a school house. This was replaced in 1891 with a rather picturesque brick courthouse still in use today. Grain and livestock were the principle commodities produced in the area.

A new more elaborate depot was constructed in 1880 at the crossing of the SC&P and CStPM&O railroads. The 24’x 64′ frame structure was set at an angle to accommodate both railroads. The old depot remained in place to serve as a freight house. Passenger traffic increased after the bridge over the Missouri River east of town was completed in 1883 with three daily trains on the SC&P and two daily except Sunday on the CStPM&O. SC&P trains were now running through from Missouri Valley intact, so the engine terminal at the east edge of town was eliminated except for the water tank. With the SC&P being the senior railroad by virtue of being there first, all CStPM&O trains were required to stop for clearance before they could occupy the crossing.

Blair became a college town in 1884 when Danish Lutherans established four-year liberal arts Dana College and seminary just west of town. A four-story brick school and administration building was constructed in 1886 with other buildings added as the college prospered over the years. It is known for its choir and traditional Christmas festivities. Population expansion of another sort came during the summer months of the 1890s depression era when from 50 to 150 tramps would be at Blair–a stopping off place between freight trains. The gangs were feared by the town’s people as well as trainmen.

Blair’s first water works was installed in 1885, greatly improving fire protection, and electric power from a city plant came in 1889. Telephone service with the Blair Telephone Co. began in 1902. As the town grew, north-south street designations were changed to accommodate the expansion. Walker Avenue in the middle of town became 16th Street with descending numbered streets to the east and higher numbered streets to the west, reversing the original arrangement. Named east-west streets remained unchanged.

By 1890 a wide curved connection was constructed between the CStPM&O near South Street and the SC&P near Eighth Street to allow direct operation of trains to Omaha over the CStPM&O from the SC&P to the east. The Sioux City & Pacific was consolidated into the Chicago & North Western on August 28, 1901 and in 1910 a new C&NWCStPM&O jointly owned brick passenger station replaced the old frame structure where their tracks crossed. The agent’s office bay was in the center where he could observe and control the traffic on both railroads. The 22′ x 104′ wing to the west paralleling the C&NW main track contained the baggage and boiler rooms in addition to a waiting room. The 26’6″ x 47′ waiting room wing to the south paralleled the CStPM&O main track.

Waiting rooms were finished with oak trim and tile floors. The old depot building was moved closer to the business district on the north side of the C&NW tracks to serve as a freight house. The original depot freight house adjacent to the main line was removed. There were just two daily passenger trains on the C&NW at this time.

By 1920, records show other structures included a one and a half story section house, a motor car house, two section tool houses, a carman’s office, three box car bodies for storage, and a large 24′ x 16′ wood water tank on timber supports. The tank was supplied from two wells with pump houses powered from a boiler house.

The automobile ferry over the Missouri River east of Blair was replaced by a toll bridge in June 1929. Being designated as part of U.S. Highway 30, it greatly increased street traffic through town. The bridge was rebuilt and made toll-free in the 1940s. The Blair Gas Co. that was organized in 1908 to provide coal gas for lighting and cooking was converted to natural gas in the late 1930s.

The 1930s brought more changes in passenger service with just one daily train on the C&NW that deteriorated to a mixed train by 1939. Service on the CStPM&O however, seemed to improve for a time with a daily through train from Omaha to the Twin Cities and a daily except Sunday motor train to Sioux City. The motor train was gone by 1938 though, and the gas-electric car was assigned to power the Twin Cities train to Sioux City until World War II when steam locomotives returned. The last CStPM&O passenger train through Blair was on June 3, 1950, effectively ending all regular passenger service for the town.

Even though through service on the CStPM&O to Sioux City was permanently severed by a bridge washout near Pender, Nebraska in July 1950, crossing protection at Blair was substantially improved in the mid1950s with installation of smash boards and a swing crossing gate with a red target and signal. Signal protection was also installed where the CStPM&O connecting track met the C&NW near Eighth Street. The Chicago, St. Paul, Minneapolis & Omaha Ry. had been stock controlled by the Chicago & North Western almost from its inception, but on January l, 1957, it was formally leased and taken into the parent road. Blair now had but one railroad on two routes.

With the former CStPM&O line north of Blair now just a secondary branch, the crossing over the C&NW was removed about 1970, and a switch in the C&NW main line used to reach it. Through progressive abandonments, this branch and all former CStPM&O track through Blair had disappeared by 1980. The depot lasted until October 19, 1987 when it was demolished in a single day, rather upsetting some local residents who thought it might be used for other purposes. The cap stone over the agent’s office with “Blair” cast in it was saved and is now on display in the local Chamber of Commerce office.

With more frequent and longer trains operating through Blair in the 1960s and 1970s, and sometimes stopping, effectively cutting the town in two, citizens became concerned about emergency police and fire protection for the north side. At least two engineers were arrested and fined $50 for blocking crossings. This was finally resolved with a grade separation over Highway 75 on 19th Street completed in August 1993. Track was raised starting west of 16th Street to accommodate the underpass with welded rail having been installed on this line the previous summer. Blair had a new railroad name to deal with when Union Pacific completed its purchase of the Chicago & North Western on June 26, 1995 and the tracks became even busier. A big boost to the local economy and railroad freight operations came when Cargill opened a new corn processing plant along the river just southeast of town in August 1995. The plant has a daily consumption of 120,000 to 170,000 bushels of corn to produce high fructose corn syrup, fuel grade ethanol, corn gluten, and animal feeds.

Through all this, Blair has maintained much of its small town atmosphere with turn of the century or older brick buildings still in evidence along Washington Street in the downtown area and typical smaller sheet metal covered grain elevators at trackside. The only railroad structure remaining is the 1880 depot that had been relocated as a freight house and now serves as a storage shed for one of the local seed companies. 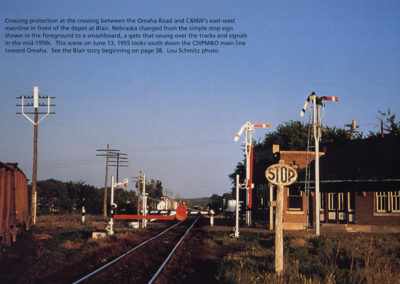 Crossing protection at the crossing between the Omaha Road and C&NW’s east-west mainline in front of the depot at Blair, Nebraska changed from the simple stop sign shown in the foreground to a smachboard, a gate that swung over the tracks and signals in the mid-1950’s This scene on June 13, 1955 looks south down the CStPM&O main line toward Omaha. Photo: Lou Schmitz Collection. Scan from Chicago & North Western Historical Society Magazine Fall 1997 Issue/Catalog No. DPT-0017

The crossing in front of the depot is already gone in this July 29, 1973 photo of the Blair depot. Note the new train order signal across the C&NW main line from the depot and the train order transmitter in front. The depot was demolished in 1987. Photo: Lou Schmitz Collection. Scan from Chicago & North Western Historical Society Magazine – Fall 1997 Issue /Catalog No. DPT-0010