Home > Archive > Blair’s Bridges > A man whose name was Blair

A man whose name was Blair 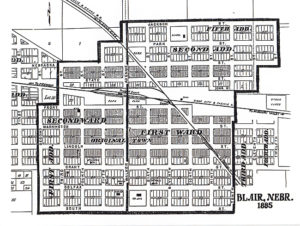 John Insley Blair is remembered as a planner of railroads, a railroad stock speculator and bridge builder. He has been compared to Jay Gould, but was more a builder than a financial manipulator. His life style was simple and energetic, yet he was generous with his land and money for worthy causes.

Blair was born on August 22, 1802 in the northern part of New Jersey where his grandfather had settled in the 1730s when he emigrated from Scotland. At the age of thirteen his father sent him to work in a cousin’s grocery store to learn the fundamentals of business; just six years later, at age 19, he established his own store in partnership with a cousin whom he bought out two years later. In a very few years he developed his business into a chain of five stores, a flour mill, an iron foundry, and a bank. When he was 23 years old, his fellow citizens appointed him postmaster and when he was 37, they changed the name of their town to Blairstown.

The railroad career of John Blair began when his partners in the iron foundry received an order for 12,000 T-rails for the extension of the Erie Railroad from Port Jervis to Binghamton, New York, and Blair’s capital was needed to expand the foundry. When the Delaware Lackawanna & Western Railroad was formed in 1853, John Blair was selected as its Managing Director. Then in 1860 he was one of the New Jersey delegates to the Republican National Convention in Chicago where he met Abraham Lincoln. After the convention John Blair was one of those invited to travel to Iowa. They were able to go by rail to Dunleith opposite Dubuque, then by boat down the Mississippi River to Clinton, where they transferred to the railroad coaches of the recently constructed Chicago Iowa & Nebraska Rail Road. The tracks had been completed only as far as Cedar Rapids, but Blair decided, as he wrote in his diary: “I consider this Road considering its extension with the land grant on the 200 Miles west of Cedar Rapids, one of the most desirable and it rightly managed ought to pay.”

Within a year Blair was given a hand in the management of the CI&N which reached Marshalltown in 1862. On July 8th of the same year, the CI&N was leased to the Galena & Chicago Union, and another company, the Cedar Rapids & Missouri River Railroad, was organized to build from Marshalltown to Council Bluffs and also leased to the G&CU. By 1863 Blair was completely in charge of the construction of the CR&MR, and he personally surveyed the route. Under his determined and skilled management this line was completed and connected with the Union Pacific in 1867. Both the Rock Island (Mississippi & Missouri) and the Burlington (Burlington & Missouri River) had begun to build their lines across Iowa toward Council Bluffs ahead of the Galena & Chicago Union’s leased lines, but G&CU won that race because of Blair’s abilities. “In Iowa, Blair was the North Western and the North Western was Blair,” as Frank Donovan summarized that history, writing in the Palimpsest, April 1962. Because the G&CU (C&NW) line across Iowa was a vital and necessary part of the first transcontinental railroad and that accomplishment was a key factor in the preservation of the union, Blair helped significantly to further the cause of the union. In 1869 John I. Blair was given a piece of the Golden Spike driven at Promontory Point in recognition of his outstanding part in the completion of the first transcontinental railroad; he wore it as a watch fob.

Blair recognized the opportunities of the developing west and continued to push in that direction via the Sioux City & Pacific and its extension, the Fremont, Elkhorn & Missouri Valley Railroad. He was the first president of both roads which were absorbed into the C&NW on August 28, 1901 and February 28, 1903, respectively. The FE&MV was by far the larger, extending north and west from Fremont to Norfolk and west into Wyoming and the Black Hills of South Dakota, southeast to Omaha, and then into much of south central Nebraska as far as the Kansas border at Superior by the end of the 1880s. The Missouri River crossing near Blair, Nebraska became a crucial link in this expansion.

John I. Blair’s association with the C&NW concluded with his serving as a member of the Executive Committee from June 4, 1885 until his death at his home in New Jersey on December 2, 1899 at the age of 97. His name is perpetuated in towns like Blairstown, Iowa and Blair, Nebraska.