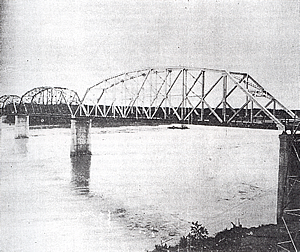 Such a crowd! But no wonder, [is] today the Blair bridge was officially opened and dedicated and this [naturally] this is is an event of far importance to this community.  Blair is entertaining today Governor  Weaver of Nebraska, Governor Hammil of Iowa, Congressmen [   ]  and Howard of Nebraska, and congressmen Campbell of Iowa well as scores of other distinguished guest from near and far. The actual ceremony of opening the took place at 10:30 morning. A blue ribbon had been stretched across the center of the bridge.  At the appointed time, the governors, with their parties, advanced from their respective sides, met at the center and the governors congratulated each other on the completion of this artery of communication between the two states. Miss Nebraska and Miss Iowa then untied the ribbon that opened the bridge, while bands were playing and aeroplanes [sic] were cavorting over the bridge. A large grove on the Iowa side had been beautifully decorated for the occasion. Here an immense crowd had gathered for the occasion. Both governors and several other prominent speakers addressed the vast audience, and all emphasized the importance of this medium of communication, not only to the immediate localities but to the country at large. Our fellow townsman, Reed O’Hanlon, who is president of the bridge company, was master of ceremonies for the day. After the program, the most distinguished visitors, numbering about 350, were taken to Dana College where the ladies of our local church had prepared a sumptuous spread for them. While our ladies are not in the habit of serving governors and congressmen, they did wonderfully well and went about the task as if they had been trained for that class of catering. Dana College was pleased to have this distinguished assemblage under its roof, and many of the visitors spoke unstinted words of praise of the facilities afforded by our modern and commodious new school buildings.

The Blair bridge will undoubtedly mean much for Blair and vicinity. Many of our people have dreamed for years of a bridge across the Missouri River at this point, but few have ever expected their dream to come true, at least for many years to come. Much credit is due Mr. Reed O’Hanlon of this city, who pulled this pet project out of dreamland and put it on a sane business foundation. But the bridge is not of local importance only. So far as east and west transportation is concerned, its importance has a national scope. The Lincoln Highway will, in the near future, be routed over the new bridge. This will save the traveller [sic] going east or west a distance of twenty-eight miles, and it will also save them from the discomfort of travelling [sic] or passing through the congested districts of Council Bluffs and Omaha.

But the opening of this new bridge is also an event of importance to Dana College. Students and visitors, who travel by auto over the Lincoln Highway to Dana from the east may save fifty miles by taking advantage of the new bridge. Thus Dana is now fifty miles closer to points in Iowa and Illinois in a latitude east and northeast of Blair.