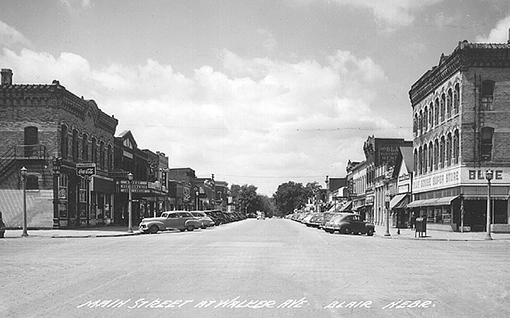 16th and Washington Street, Blair, Nebraska
Looking towards the west from the corner of old Walker Ave. (now 16th Street) – Mayle & Hungate Buildings is on the right side.

1957 Renovation
Photograph looking south west. The HunTel building was once home to Hugh Cook’s store, which boasted a bowling alley on the top floor, and the Robinson Store. Before HunTel moved in, the building was also home for the Washington County Bank, prior to the construction of its new building. 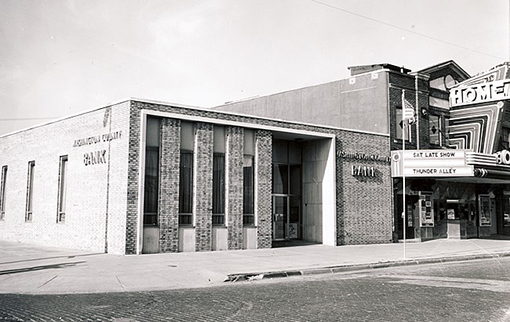 Some movies had musical accompaniment. Sheet music, for piano and violin came along with the film and the Kemp sisters, daughter of the proprietor of the BeeHive, were the musicians.

When the projector light came on, kids in the front rows would toss their caps in the air and the shadow of the sailing caps would show on the screen. Before the movie would start a sign would appear on the screen, saying, “Will the Ladies Please Remove their Hats.”

The side of the building next to 16th street was used for billboard advertising of coming attraction. (Circus, Carnival, Chautauqua, Tent shows etc.) George Elaissen, a painter by trade, would paste the huge posters to the wall in exchange for tickets to the movie for his family of eight.

On Saturday nights, Popcorn Mary (last name unknown) set her popcorn machine on the sidewalk in front of the theater. You could buy popcorn by the sack for a nickel and by the box for a dime.

When talking movies were first produced, Charlie Robinson purchased the two building to the west of the old theater and built a new theater and a restaurant in their place.

The old theater then became a sporting goods store, run by H. J. Cook who also managed the Blair baseball team. A bowling alley was on the second floor and was managed by Clarence King.

(Other notes) I’m told at one time there was a bowling alley on the second floor. Young boys would be paid as pin setters.

There was a second story on this and the bowling was up stairs. (Clarence King Bowling Alley)

Do you have memories of downtown Blair you'd like to share? If so, we'd love to hear from you! Please use the form below or send an email to contact@blairhistory.com.

Fill out my online form.