from Historical and Descriptive Review of Nebraska.  Volume II.,  Omaha, 1892

One of the most gratifying examples of ably conducted concerns in the West is the institute at Blair Nebraska. of the celebrated Bedal Gold Cure Co. (capital stock $50 000), which has lately become so well-known on account of its many radical cures of all humanity afflicted with the disease of the cup. 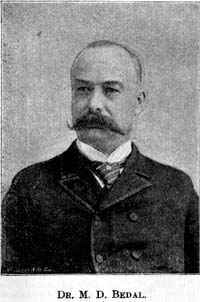 If you have a friend who is addicted to the liquor habit, and who has not the will power to quit it of his own accord, inform him that at the Bedal Institute at Blair, Nebraska, he can be cured within a period of three weeks. The Bedal Gold Cure Treatment is the safest and most thorough known. Drinking men from nearly every walk of life are being cured. It matters not whether you are a beer, wine or whisky drinker, steady or periodical, we can cure you. The usual period for treatment is three weeks. The cost is $50. For full particulars address The Bedal Gold Cure Co., Blair, Nebraska.

All who have friends or acquaintances, slaves to the liquor habit, should not fail to write for an interesting pamphlet giving all information of the institute to Dr. M. D. Bedal, the president. In this pamphlet will be found all points concerning this grand and sure treatment for the awful curse of drink, also as regards taking the “shot;” also for the numerous testimonials from all parts of the States from grateful patients.

The Institute Building
The structure is a two-story brick situated in the center of the business portion of the city. It is handy to the hotels and boarding houses as well as the business houses, the postoffice and the depot. The business office and “shot” room are on the ground floor. Also a spacious room for visitors and friends of patients who are being treated. On the second floor are the club rooms for the patrons of the institute. In the front is a large, square parlor, nicely carpeted and provided with easy chairs, a sofa and other comforts. There are card tables, checkers and chess boards. dominoes and other innocent games for the amusement of the men who are here. Beautiful and costly pictures hang from the walls, and altogether the room is decidedly cheerful. Stacks of the best literature of the day are left at the disposal of the men. The daily newspapers of the State are received at the club rooms.

Our Terms
Any person who has a friend whom he desires to have take the treatment can forward the money to the management of the institute and the same will be receipted for at once. In case the patient arrives under the influence of liquor he will be provided for with all necessities and when sober can have whatever money was sent him. The terms are fifty dollars. For this amount a cure is guaranteed. The patient may remain until he is thoroughly convinced that he is cured. This amount must he deposited in advance of the treatment. Dr. Bedal’s medical eye is on his patient daily and the very best of care is given to each individual. As to board and lodging the patron may choose for himself. There are a number of places to select from. Good board and lodging can be secured for $4.50 a week and fair quarters may be had for as low as $4 a week.

Dr. M. D. Bedal, the gentleman who made the discovery of this Gold Cure, is president of the company and is also the physician who is in charge. He administers all the medicine and looks carefully after all patrons of the institute. He also prepares all the medicine that is used in Bedal Gold Cure Institutes in other States where a franchise has been purchased. His entire time is given up to the gold cure project, consequently every detail is attended to in a thorough, skillful manner.

Dr. Bedal is forty-six years of age. Previous to commencing the study of medicine he was for three years a student in the University of Chicago. From there he went to the Miami Medical College, of Cincinnati, Ohio, where he took the three years or graded course in medicine, graduating in March, 1874. Since graduating he has been continually in the practice of medicine and surgery. He was for several years United States Examining Surgeon for Pensions at Blair, Nebraska.

He is a member of the State Medical Society of Nebraska, also a registered pharmacist and is proprietor and owner of a fine drug store in Blair. Nebraska, where he has resided for nearly fifteen years He has given much study and thought on the subject of alcoholism and the drink habit, and during the past year has completed his cure for alcoholism. Putting this discovery into actual practice, he is now treating a good number of patients and cured a number of the worst cases without a single failure.