Earliest know images is from 1892 when it was the home owned by Mr. F. W. Kenny.  It later served as the home of local physician, Dr. Nielsen, who had his offices in the second floor rooms.

Grand opening of the Keeley Institute

Mr. F. W. Kenny, Sr.
Mr. Kenny, the president of the Keeley Institute of Blair, is a gentleman so well known in this part of the state that it is poor taste for the writer to undertake the difficult task of saying anything that would be new to most of our readers, but we cannot let the opportunity pass without giving a few lines in reference to his past life.

Mr. Kenny was born in Geneva, Ashtabula county, Ohio, in 1844. There he passed his early lift going to school. Mr. Kenny also took a turn at the printers trade, but was fortunate enough to drop it before he got too far going on it.

At the outbreak of the rebellion he enlisted and was with Sherman all through the war, receiving an honorable discharge in June 1865. He returned to his home in Ohio, and remained there but a short time, going to Chicago to engage in the wholesale hardware business, where he remained for five years, traveling most of the time for the house he was connected with. At the expiration of this time he concluded to come farther west, and in 1870 he came to Blair, bought an interest in the hardware business of H.C. Riordan. Here he continued with Mr. Riordan for seven years, when Mr. J. S. Stewart purchased the interest of Mr. Riordan, and the firm became known as Kenny & Stewart. The new block was built in 1882. In January 1887, Mr. K. sold out his interest to J. H. and E. A. Stewart. The Blair State Bank was organized in 1887, Mr. Kenny being elected president, which position he has since held. The bank is located at the northeast corner of Washington street and Walker avenue, and the building is one of the finest in the county. He was one of the organizers of the Blair Canning Company, and is still a member of the board of directors. He has been a member of the Board of Education for sixteen years, three of which he served as its president. Mr. Kenny has been mayor of Blair twice, and that he gave satisfaction is evidenced by the manner in which the people in general wanted to elect him again, but he insisted on not accepting if elected. He is president of the Building and Loan Association, a prosperous and paying institution; also president of the Electric Light Company, and in all is one of the busiest gentlemen in this neck of the woods.

Mr. Kenny was married in 1871 to Miss Amy Taggart, daughter of Rev. J. M. Taggart, a gentleman who was well known and respected by the people of this county. Mrs. Kenny was also a general favorite in this city. They have seven children, five girls and two boys, the oldest being Fred W. Kenny, Jr. They reside at the corner of Grant and Fifth streets, where everything is planned to make a pleasant and comfortable home.

As president of the Keeley Institute, Mr. Kenny has been a faithful worker for this cure and the making of so many men, and he is honored and respected by many reformed men and thankful wives and children. 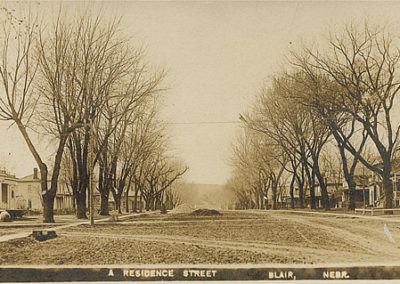 Looking west at the corner of present day 18th & Grant Streets. Note Castetter House on the left and the Kenny House on the right. Real Photo Post Card/Nathan Krämer Collection/Catalog No. RES-0008 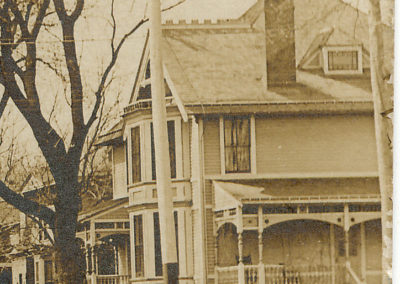 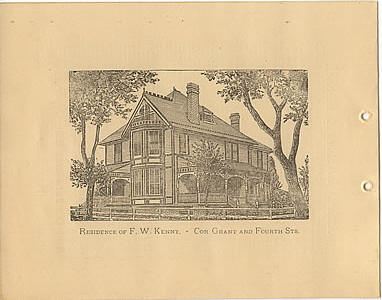 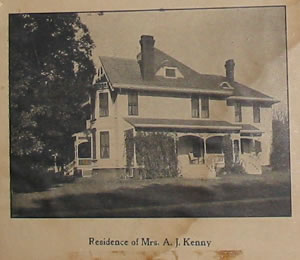