Earliest records indicate Rev. J. Hilgendorf of Omaha began first Lutheran mission work in Blair during 1870. No more is written of it until he then pastor at Brown Creek (St. Paul’s) Arlington, began holding services in the Courthouse and Lutheran homes in 1887.

In 1889 the small group was formally organized as Evangelical Lutheran Trinity Church. In the fall of 1890 the first pastor was installed. Trinity became a member of the Missouri Synod in 1894. The year of 1897 saw construction of a parsonage; in 1898 incorporation according to Nebraska law; 1899, an addition on the west end of the frame church, to better serve as school (pastors taught parochial school until 1904) and 1902 a barn to shelter the horses.

In 1974 the Ladies’ Guild began collection confirmation class pictures, beginning with 1897, to be placed in permanent church files, hope to have them all be Trinity’s centennial in 1989. Submitted by Mrs. Milo Jeppesen. 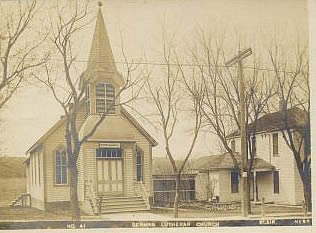