Church Built:  Before 1903
Located: Corner of Colfax and 14th Street

About the middle of the eighteenth century, Catholicism was first introduced into the region now served by St. Francis Borgia Catholic Church of Blair, but until the establishment of Blair there were no regular religious services.  With the town’s incorporation in 1869, missionaries from Omaha started periodical visits here and occasional masses were said in the old section house and private homes.

It seems the parish was organized in 1871, as St. Joseph’s Catholic Church, but when it was incorporated in 1886 the official title was St. Frances Catholic Church of Blair.  It was located at what is now 15th and Colfax.  Irish and German railroad workers and rugged settlers of the Catholic faith contributed generously of their time and money to help build the first church which cost $1,000.00.

In 1889, increases in membership made construction of a larger church necessary and it was built at the same location.  Records show that non-Catholic friends voluntarily contributed substantially in the building.  The rectory was built next door in 1900.

The Blair parish flourished and in 1958, with families numbering 130 unites, construction of a large church which included a social hall and rectory was begun.  It is located at 20th and Davis on the south edge of Blair.  Since that time an education building has been added where currently some 200 elementary age children receive weekly religious instruction.

The parish has many active organizations — the local Council of Catholic Women; Men’s Holy Name Society; Confraternity of Catholic Doctrine for the catechetical instruction of grand and high school students; an Over 55 Club, and a parish council with several committees serving the activities the activities and needs of the congregation.

The Jack Jensen Construction Company was the low bidder on the new church and rectory for St. Francis Borgia Catholic Church. The Blair firm, one of seven bidding, set the figure at $178,900. 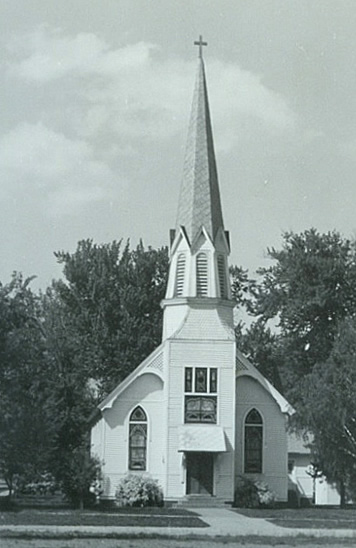