The history of this church begins in the former Washington County community of Cuming City where in January 1858 an informal meeting was held at the log house of T. C. Hungate to organize a church by those residents of Baptist faith. Meetings were held in the various homes and G.E. Barnes was engaged as pastor and come every two weeks on horseback.  The first baptism in Nebraska was held at Cuming City through the ice in Fish Creek, Rev. J. M. Taggart, an outstanding leader in the development of Nebraska, officiated, and later became pastor of the church.  A house, formerly used for school purposes, was purchased at auction and was made serviceable through much expense and labor by members of the church. In 1868 a new church was built. However due to the development of the town of Blair many of its members left and the church declined.

In April 1869, the Rev. E. G. Groat, pastor of the Cuming City Baptist Church, preached the first sermon ever delivered in Blair.  This service was held on the platform of the newly erected depot.  The First Baptist Church of Blair was formed in September 1869 meeting in a passenger car on the railroad track.  Later meetings were held in a hall owned by Dexter & Smith.  Sunday School was held at the hall then was moved to the newly built courthouse.  In 1872 the church building at Cuming City was donated to the Blair church and moved to the site of the present building  This church was used until increasing membership and attendance made a new church building necessary.

The present church was built and dedicated on August 27, 1892, completely paid for at the time.  In the 1950’s a basement was dug under the sanctuary and later new ceilings and modern lighting were added.  In 1975 an educational wing was added financed by the selling of bonds to members and community residents, which bonds are steadily being retired.  Other improvements have been new carpeting and air conditioning along with some remodeling of the rear of the sanctuary.  The church started with 7 members and maintains a membership of about 155.  The present pastor, Rev. M. James Metzgar, has served since November of 1972.

The church is self-governing; however for a more effective program it affiliates with the American Baptist Convention, the Nebraska Baptist State Convention, the Nebraska Baptist State Convention and Omahaland Association but none of these have authority over the local church.  The members formed a corporation of the church in 1974. The church believes in the basic Baptist beliefs of the authority of the Bible, the priesthood of all believers and the separation of church and state.  Only two ordinances are observed, those of believer’s baptism by immersion and the Lord’s Supper or communion.  Membership in the church is composed of only baptized believers.  Submitted by Vera Sappenfield.

From 1882 ––  “The first sermon preached to the Baptists was on the last Sunday in April, 1869, by Rev. E. G. O. Groat, on the platform at the railroad station, who also organized the first Sunday school. Their church building was moved from Cuming City in the fall of 1872. It is a neat frame building, which with parsonage, is worth nearly $2,000, and their church membership is sixty.” 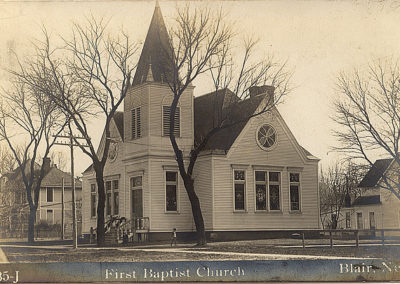 Real photo postcard from the Nathan Kramer Collection/Catalog No. CHU-0006 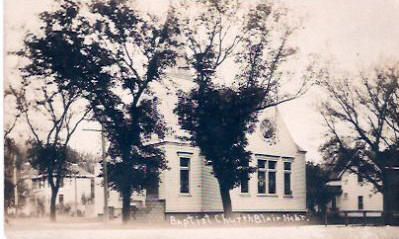 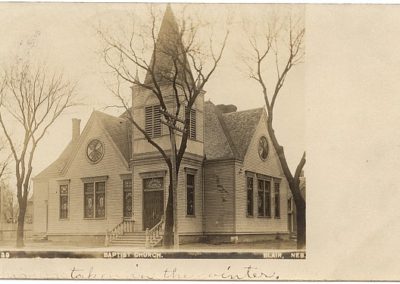 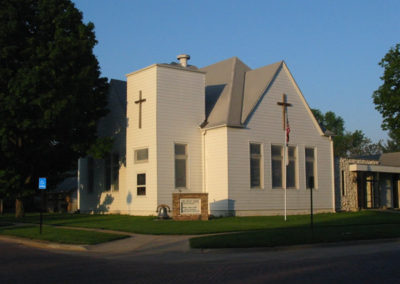