J.T. Christensen (1890-1921) was one of aviation’s first heroes. Born in Denmark, he came to this country with his parents at the age of four. They settled in Blair, Nebraska where he grew up and attended Dana College before World War I. During that war he was a military flight instructor. Then in 1920 he hired on with the U.S. Postal Service’s new airmail delivery.
Buried in the Blair Cemetery (Block: 85 Lot: 8 Grave: 8) on 5/4/1921 Age: 31

Air mail pilot sacrificed life to save others

April 30, 1921, Plain-Dealer – Forced to seek a landing in downtown Cleveland by engine trouble and unable to see because of a dense fog, Air Mail Pilot J.T. Christensen (James Tinus) yesterday afternoon sacrificed his life rather than attempt a landing in a street — a course which would have endangered the lives of many people.  Facing death, he struggled for fifteen minutes to find a landing place before the crash scene.

James Tinus Christensen
The pilot fell 200 feet to the Erie railroad tracks at Scranton and University roads S.W., almost under Central viaduct.  His airplane was reduced to a mass of tangled wreckage, the gasoline tank exploded and the fire which followed burned the pilot’s body, caught under the debris.

Christensen, his engine missing, searched back and forth over the southern portion of Cleveland for a vacant lot in which to land.  He flew low, barely missing the tops of some buildings.  Many person stood on the street and watched.  They said his engine seemed to be missing, and to the observers it was evident he was in straits.

Once he skirted over a vacant lot into which he might have dropped, but did not see it because of the fog.  He tried once to rise, but was unable to attain enough altitude to allow him to continue the search.

When he was directly over the Cuyahoga river he flew upstream, presumably intending to drop into the river, but Central viaduct suddenly loomed ahead and he was forced to return.

Trapped between Central viaduct and the high level bridge, he circled upstream once more, flying at the height of the viaduct until suddenly his engine appeared to fall entirely and he fell, the plane striking on its nose among the piles alongside the railway tracks.

Misses River by 25 Feet
Aviators say that if he had dropped into the river, twenty-five feet away, his life would have been saved.

The aviator’s battle for life was watched by hundreds who were attracted by the roaring of the motor.

His flying mates, who declare he was one of the most skillful of air mail pilots, say that in the fog he could not have been able to see beyond 200 feet.

Unable to get his engine to run properly, they declare, he was forced to look for a way out of his difficulty.

The only paths open were to attempt a street landing, with great danger to vehicles and lives, to find a vacant lot, an attempt which he made and failed in, or to drop into the river.  They say that he was trying to descend into the river, feeling his way in the fog, when the crash came.

Christensen was making his first trip on the Chicago to Cleveland route.  He was transferred recently to that division from the Cleveland to New York route.

He told friends when he was transferred that it was exactly the assignment he wanted.  The plane he was flying was a converted De Haviland.

…Christensen was 31 years old.  His home was in Maywood, Chicago, but he maintained a room with Carl Krumhar.

…He was well known here, having flown at the first aerial tournament held in Cleveland at Woodland Hills park, Aug. 15 to Aug. 25, 1919.

He married two years ago in Cleveland Miss Lena Davis.  He met Miss David while she was attending Dana College, Blair, Neb.  The couple took an airplane honeymoon trip from Cleveland to Akron and other Ohio cities.

Mrs. Christensen is visiting relatives in Nebraska and no one was at home at the little cottage near the Maywood air field in Chicago when reporter called there last night.
click photo to enlarge

The dead aviator was one of the best flyers in the service, heads of the mail flying department said.  He held three speed records.

On Dec. 30, 1920, he startled the commercial flying world by taking mail from Chicago to New York, 741 miles, in five hours and thirty-one minutes, averaging 117 miles an hour from Chicago to Cleveland and 151 miles an hour from Cleveland to New York.  Another record was established when he flew a De Haviland from Omaha to Chicago in two hours and forty-five minutes. 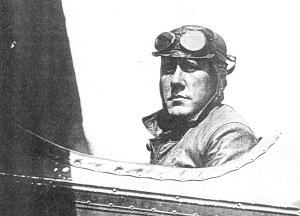 Christensen’s speed supremacy in the air mail service lay, according to officials, in his knowledge of winds.  He knew that the winds varied at different altitudes and always jockeyed up and down until he found the most favorable current.

He was taught to fly at the old Curtiss flying school at Norfolk, Virginia, before the war.  When the war broke out he joined the army as a civilian instructor and was sent to Gerstner field, Lake Charles, LA.  He later was given the rank of second lieutenant and became instructor in stunt flying at which he was expert.

After three years in the army he was discharged in the spring of 1919 and did civilian flying at Erie Beach, Erie, Pa.  He came to Cleveland to fly at the Woodland Hills tournament and then joined the mail service.

Moving the mail might seem mundane, but there was a time when it couldn’t be done without daring young men in flying machines.

The airplane had proved its value in World War I, but most sober adults probably would have balked at the offer of a joy ride in 1920. The engine was still a work in progress, and too many planes had a tendency to plant themselves face-first in a field.

Officials at the U.S. Postal Service felt differently. They envisioned the airplane as the workhorse of a new era in high-speed mail service.

They had tried to get Congress interested in funding aerial mail delivery since 1912, but lawmakers felt there were better ways to burn money.

Congress finally gave the go-ahead in 1918 for an experimental route between New York and Washington, D.C. The experiment succeeded, so postal officials set up the first legs of a coast-to-coast delivery system – New York to Cleveland and Cleveland to Chicago. These were followed in 1920 by the opening of western aerial divisions, anchored from an Omaha hub. J. Tinus Christensen was among the first crop of airmail pilots. Born in Denmark, he came to America with his parents at age 4. They settled in the Danish community of Blair, where he grew up.

Christensen served as a military flight instructor during World War I. He mustered out in 1919 and hired on with the aviation mail service in early 1920. He was one of the first to fly the Omaha-Chicago route, which was based at a field on the Ak-Sar-Ben grounds.

Flying the mail in 1920 proved dangerous. Pilots had no radio contact and no instruments for flying in bad weather. According to the late Bob Adwers, who wrote a book about flying in Nebraska, 31 of the first 40 pilots hired by the post office died in the line of duty.

Christensen was considered among the best of the airmail pilots. An experienced stunt flier, he had a keen sense of the winds aloft. He set speed records for the Omaha-Chicago and Chicago-New York mail runs.

Popular among other fliers, he helped to found the Associated Airmail Pilots union, and was elected its president.

Christensen transferred to another hub before the first coast-to-coast airmail flight passed through Omaha in the middle of a winter night in 1921. He transferred to Chicago a few months later and made his first flight on the Chicago-Cleveland route on a foggy April morning.

On his approach to Cleveland, he got lost in the fog and had to fly low over the city in search of landmarks. Then the engine on his DeHaviland biplane sputtered, and Christensen was forced to land in the downtown area. He aimed for the river to avoid pedestrians. His plane crashed and burst into flames on the railroad tracks beside the Cuyahoga River.

An estimated 10,000 people showed up for his burial service in Blair and watched as planes from the Omaha airmail division dropped flowers.

Christensen was buried as a hero, and his grave was marked with a giant airplane prop. He was honored for what he was – one of a small band of daredevils who landed in history at just the right time, a time when they could risk their lives for the thrill of being among the first on earth to fly.

The Washington Post ran the following story on the crash.

CLEVELAND, April 29.—Rather than attempt a landing in a street and thus endanger the lives of many persons, J. T. Christensen of Chicago, air mail pilot, sacrificed his life today when he was forced to seek a landing in downtown Cleveland because of engine trouble.

Unable to see because of a heavy fog, the pilot fell 200 feet to the Erie Railroad tracks at Scranton and University Roads and was buried beneath the wreckage of his machine. He was burned to death when the gasoline tank exploded, setting fire to the debris.

Christensen was making his first trip on the Chicago-Cleveland route, having left Chicago this morning. He was recently transferred to that division from the Cleveland-New York route. He held three speed records. 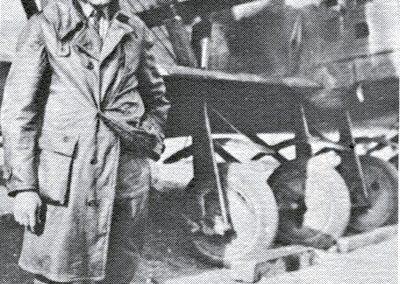 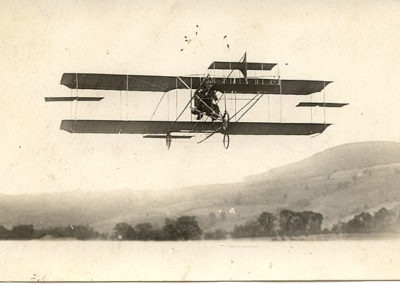 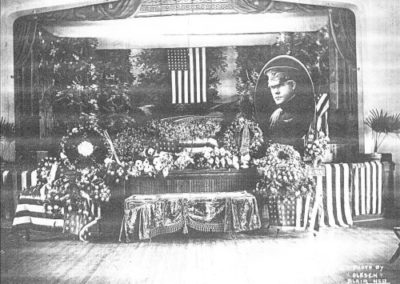 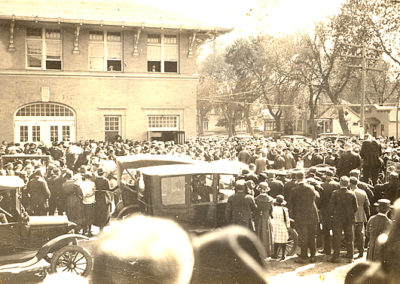 Crowd in Front of Fire hall 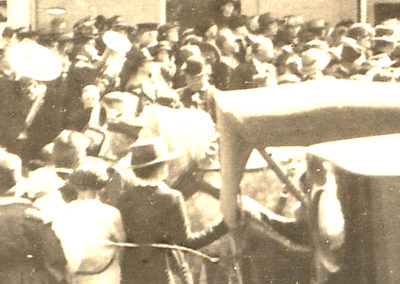 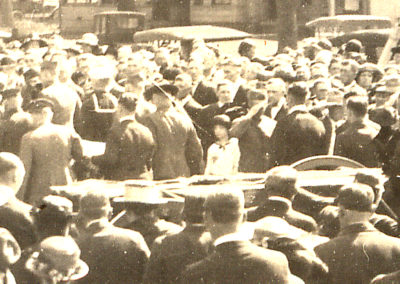 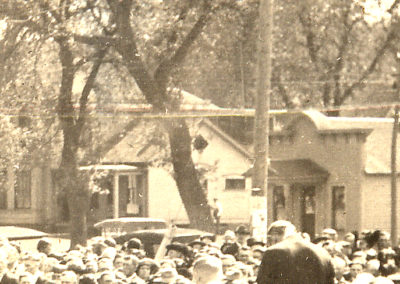 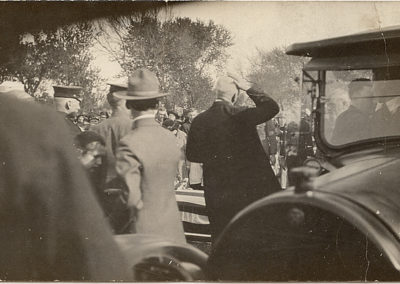 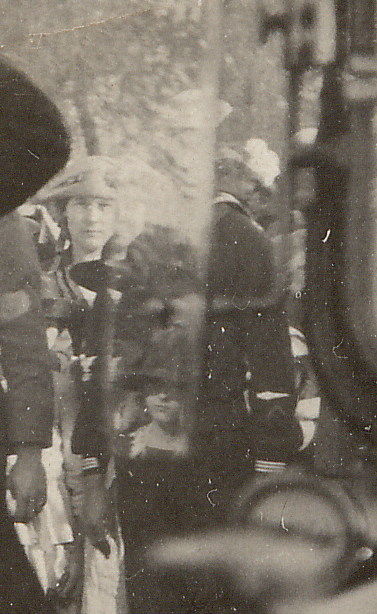 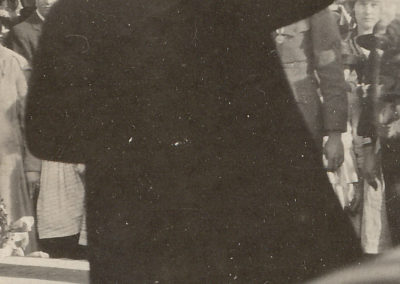 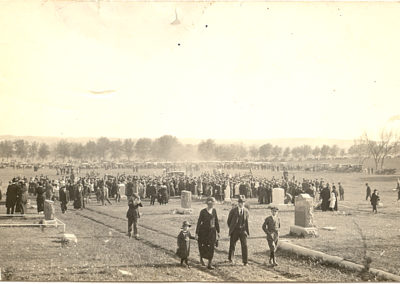 Crowd at the Blair Cemetary 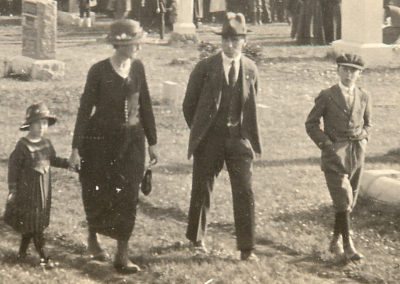 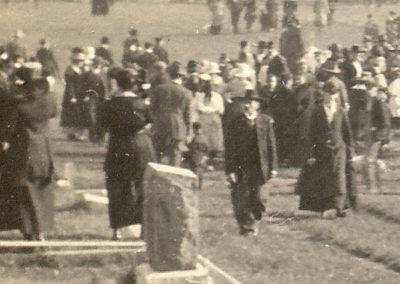 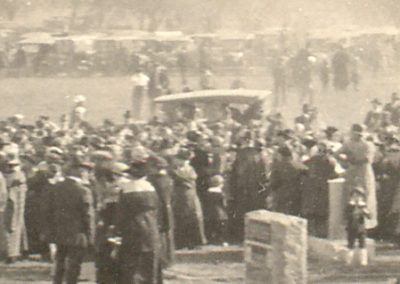 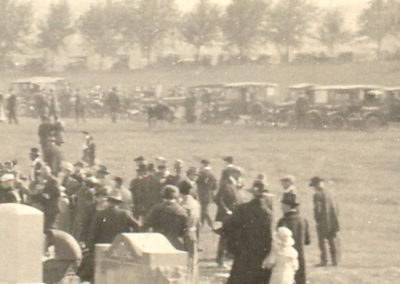