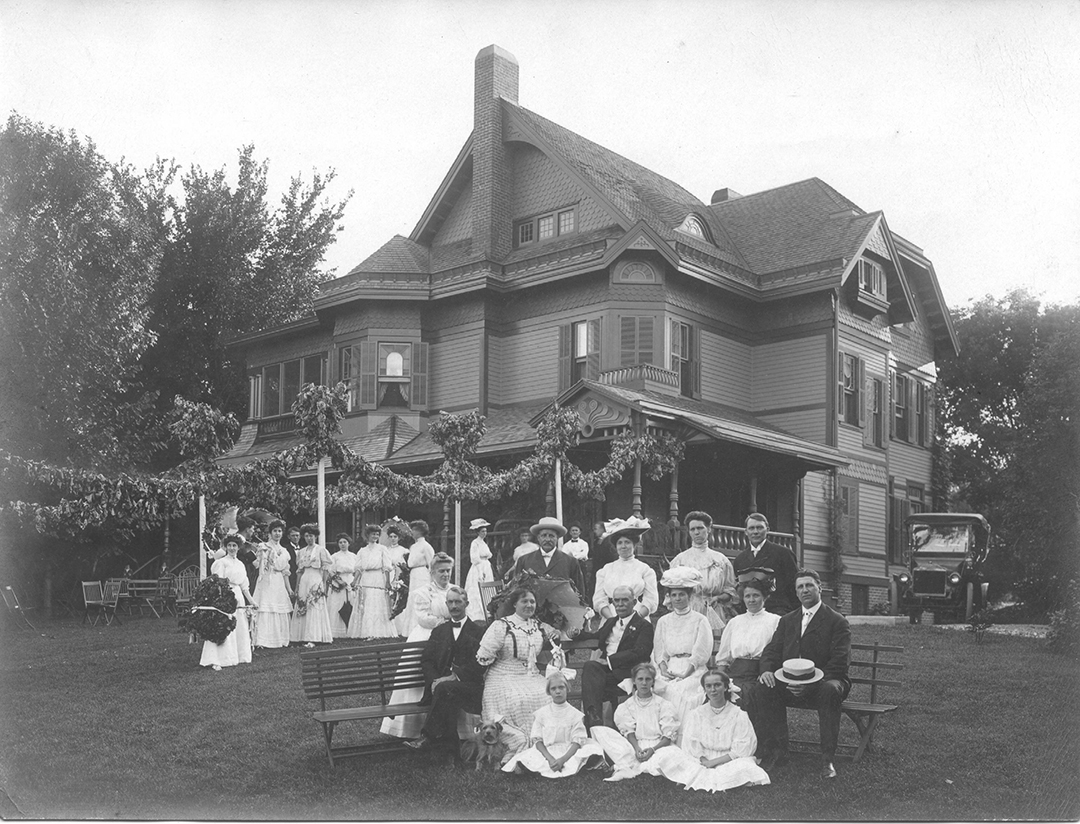 This image of the home of Austin Preble Howes is from the Dennis Historical Society collection. This is the wedding of his daughter Helen and William Morgan Haller. The Howes family first settled in America in Dennis, Massachusetts in 1636. William and Helen Haller are buried nearby in Quivet Cemetery, East Dennis MA after living their lives in Blair. The Wedding took place July, 1907. Information and photo Courtesy of Scott Walker in January of 2020. Click on the image for a larger version. 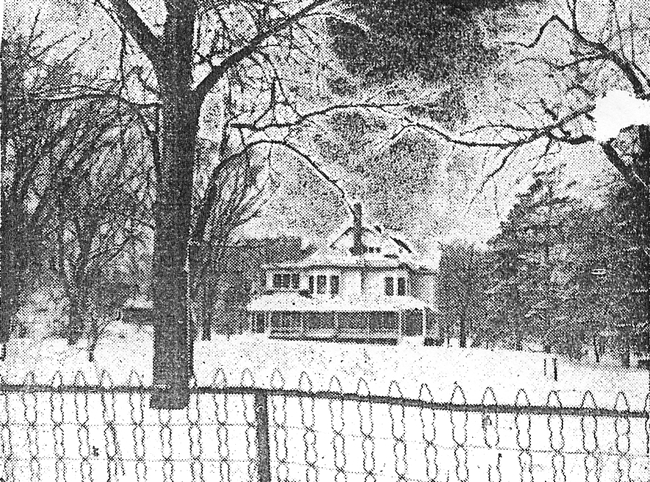 Within a few short weeks the Dr. William Haller home on West Washington street will be torn down to make way for the construction of new, smaller, modern homes.

Located on a full city block of ground, just south of Blair’s West school, the house has stood for fifty years as a monument to the day when Blair was young and money was plentiful.

The Haller house, built by the late A.P. Howes, the Crowell Home and the Bradley house (located just south of the Crowell Home and now occupied by Leslie Bucklin) were all erected about the same time and oddly enough all of these men were connected with the same business in Blair. All three men were engaged in the lumber business in what was then the Crowell Lumber & Coal Co. The lumber business was a virtual gold mine at the time with constructions springing up everywhere. Blair supported four brick yards selling locally two million bricks a year in those days, which is testimony of the boom which was on.

Mr. Howes is reported to have spent $50,000 in the construction of the house, adding to it later to increase the size by several rooms. There are three living rooms across the front of the house, all opening up together to form a room sixty feet long. The rooms are finished in fancy, carved woodwork with magnificent heavy brass chandeliers in the center of each room.

Two of the downstairs living rooms have fireplaces. In addition, there is another in the dining room. The guest room upstairs likewise has one. In a little connecting hall off the center living room there is a marble wash stand where guests might prepare themselves for dinner.

The downstairs living rooms, dining rooms and hallway are all finished with special concave recesses around every ceiling in which fancy painted designs were made. The ceilings and walls are covered with canvas on which artists worked for weeks designing artistic patterns which suited the taste of the builder. The paintings are done in gold and silver color into which were blended soft shades of pinks and blues, which when first completed, must have been an outstanding sight.

In the kitchen, a specially made built-in range was constructed. Outwardly, it had the appearance of a fireplace but it was so arranged as to form a full sized, regulation range. Gas or electric stoves were, of course, unheard of when the house was built. There is a large hallway, both downstairs and upstairs connected with a magnificent carved staircase. Stained glass windows at the head of the stairs add beauty to the already superb piece of work. On the carved posts of the staircase, fancy, turned brass gas lamps were designed to cast a light on the steps throughout the night. A specially cut, heavily padded carpet covered the steps.

Upstairs there are four large bedrooms and a bath. On the third floor there are two more rooms, one large and well finished for the use of the house maid and the other smaller. The balance of the third floor was given over to storage. There is still another bedroom and bath downstairs.

One feature of the period in which the house was built is to be found on the second floor. Two large bedrooms, each with magnificent dormer windows, are connected so that occupants of one room may go into the adjoining room without entering the hallway. The strangest arrangement, however, is a large marble lavatory which is built into the wall between the two rooms and which is available for use from either side by pulling back a curtain.

The upstairs bath is typical of the fifty-years-ago period. The lavatory is of marble and the bath tub is made out of zinc with marble around the outside. Regulation iron tubs with porcelain finish were not available when the house was built. Also, in the bathroom is a speaking tube, leading down to the kitchen, which the bather might use if he finds need for another towel or kettle of hot water.

The structure is especially well built out of heavy, knot-free material which is very costly today. It is estimated that between fifty and one-hundred thousand brick are in its foundations and basement and, with ordinary care, the house would have stood for a century.

Cost of redecorating the interior plus the need for exterior paint, re-modernizing the bathrooms and kitchen and many other items, made the house an expensive place to live. Taxes alone, on the property approached $600 per year, it is reported.

To care for the full city block of lawn would require the full-time services of a yard man and the huge house took a crew of servants to keep it in shape. New furniture, adequate to fill the many rooms, would have run into thousands of dollars, it is estimated.

As a result, the old landmark is going. With it goes the romance and the luxury of the living which marked its era.

The Enterprise is indebted to Mrs. Ed Lewellen, mistress of the Haller mansion when these pictures were taken last January. Mrs. Lewellen placed the entire house at the disposal of The Enterprise photographer and assisted materially in pointing out the details which we feel will be delightful reading for our subscribers. All photos by J. Hilton Rhoads, assistant editor of the The Enterprise. Engraving plates were made in The Enterprise’s own engraving plant, the only one of its kind between Omaha and Sioux City. 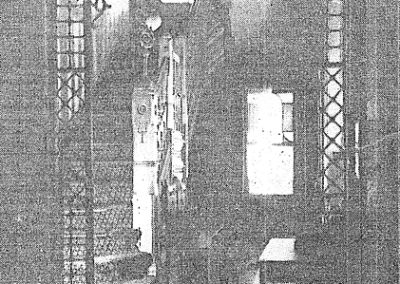 The downstairs hallway, through this beautiful bit of carving, showing the carved, ornamental stairway which winds up to the second floor. 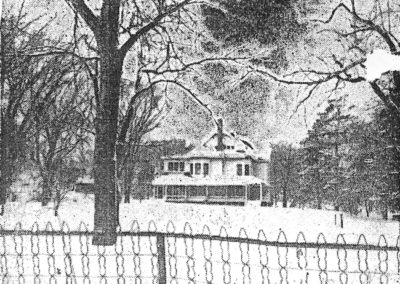 Haller House shortly before its demolition

The Haller house on West Washington street–beautiful in its day but now a burden to anyone who might try to make it a home. 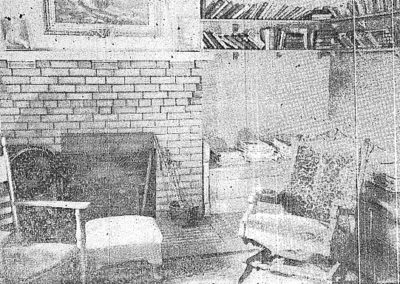 The south living room, one of the rooms which was added to the house some years after the first section of the house was built. It has a brick fireplace, settee near the fireplace, built-in books and cozy. . . .[sic] 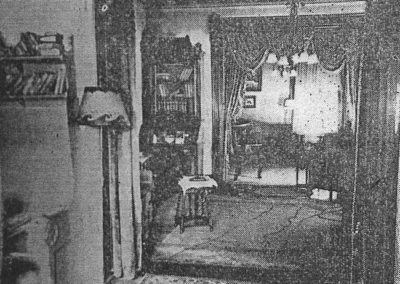 A partial view of the long living rooms. This picture taken from the south living room shows the center and north room. 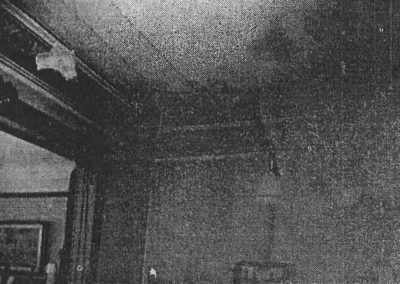 The downstairs rooms were decorated with painted on canvas which took the place of wallpaper, The corners where the ceiling met the wall, were concave, allowing a special bit of painted decoration. 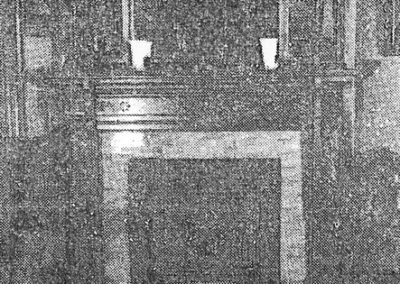 Fireplace with pink and green tile

One of the living room fireplaces. Note the grand old mantle carved out of cherry wood. The tile work on the fireplace is a special pink tile, non-existent today. The floor title in the fireplace is of pink and green tile.