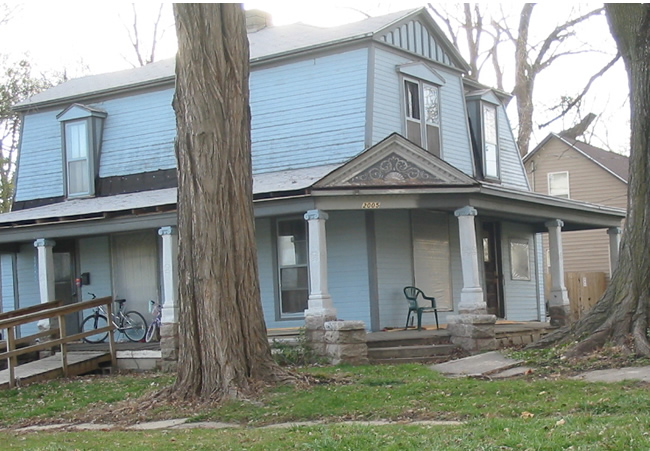 This house was once known as the J.E. Lutz Home. It is unique with this mansard roof, corner porch and carved stone porch pillars. 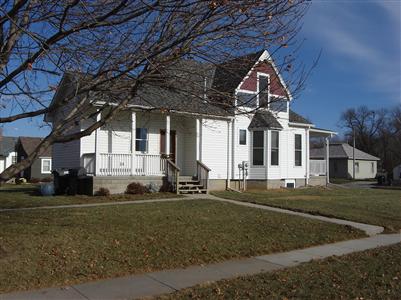 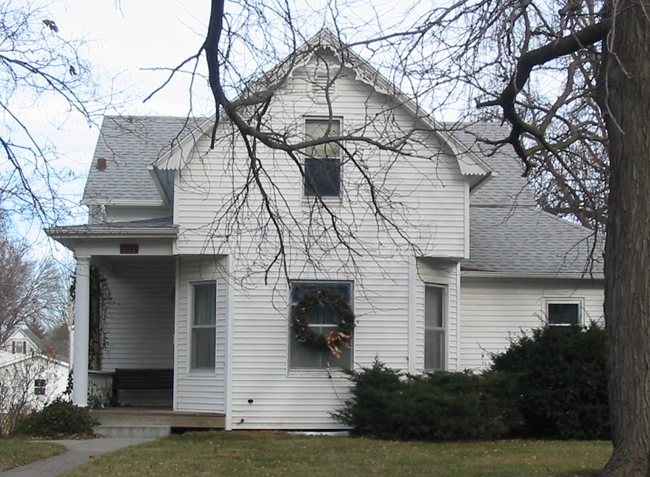 This house was built by Dr. P.S. Vig on Dana Hill, (were E.C. Hunt Campus Center stands today) and moved to its current location. 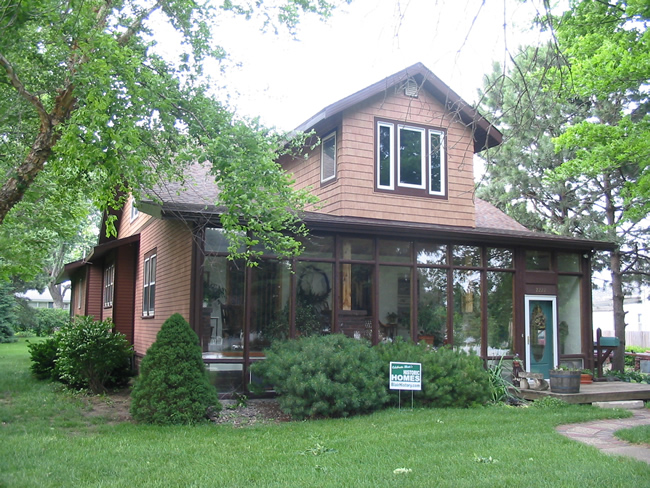 H. Skov Nielsen & his wife Anine K. purchased the property which included lots 2,3 & 4 in 1920.  The prairie or craftsman style house was built in or about 1922. It originally had a screened porch across the front and small deck /porch on the upper level.  Hafl of lot 3 and lot 4 were sold in 1947.  Dean Brochhoff purchased the home in the late 1960’s.  Abariotes purchased the home in November 1971 and have been remodeling it since then. 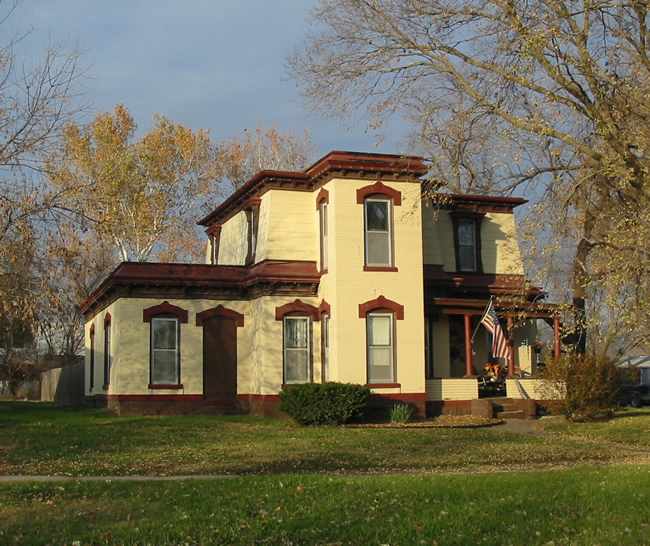 The history of 2006 Nebraska Street

Architectural Description
Located in the fourth ward of Blair, the Thomas Wilkinson house is considered significant for its brick, one-story plus mansard roof construction. Based on visual comparison with a 1908 historic photo, the house retains much of it’s exterior integrity despite the removal of the tower’s third-story mansard roof. The house consists of an irregular-shaped core with an attached front corner porch and one-story side wing. A one-story enclosed entry porch is also found on the rear or north of the house. The house is believed to have been constructed in 1885 and displays an identical form to the Arndt house (WN02-76) also built in 1885 in Blair’s second ward. The house measures 9.2 m by 8.1 m and is decorated with segmentally arched openings on the first floor, pedimented window hoods on the mansard, and a pressed-metal cornice surrounding the base of the mansard floor. The altered front tower was used to form a striking silhouette and was internally divided into one-story spaces. The floor plan of the house appears to have retained much of it’s original wall division. Access was gained through one of two perpendicular adjacent entryways, the south leading into a front room, and the east into the main living space. The two-story core has just three main rooms, two of which were mentioned above and then a kitchen space located to the north at the back of the house. A side one-story wing contained additional living space and had a separate front entry covered by a non-extant porch.

Historical Summary
Born in England in 1838, Thomas Wilkinson eventually settled in Washington County, Nebraska. Thomas immigrated to the United States in 1864 and initially settled on a farm 7 miles south of Blair. Here, the Wilkinson family had purchased a tract of railroad land and soon began farming there. By 1885, the Wilkinson family decided to move to Blair and build a new home. Their reason for leaving the farm is unknown. In Blair, the Wilkinson’s built a brick mansard-roofed house on Nebraska Street and resided there until 1904 when Hans Lamp took possession.  More recently, Joan Masters (Susan Nielsen’s Mother) owned the house. 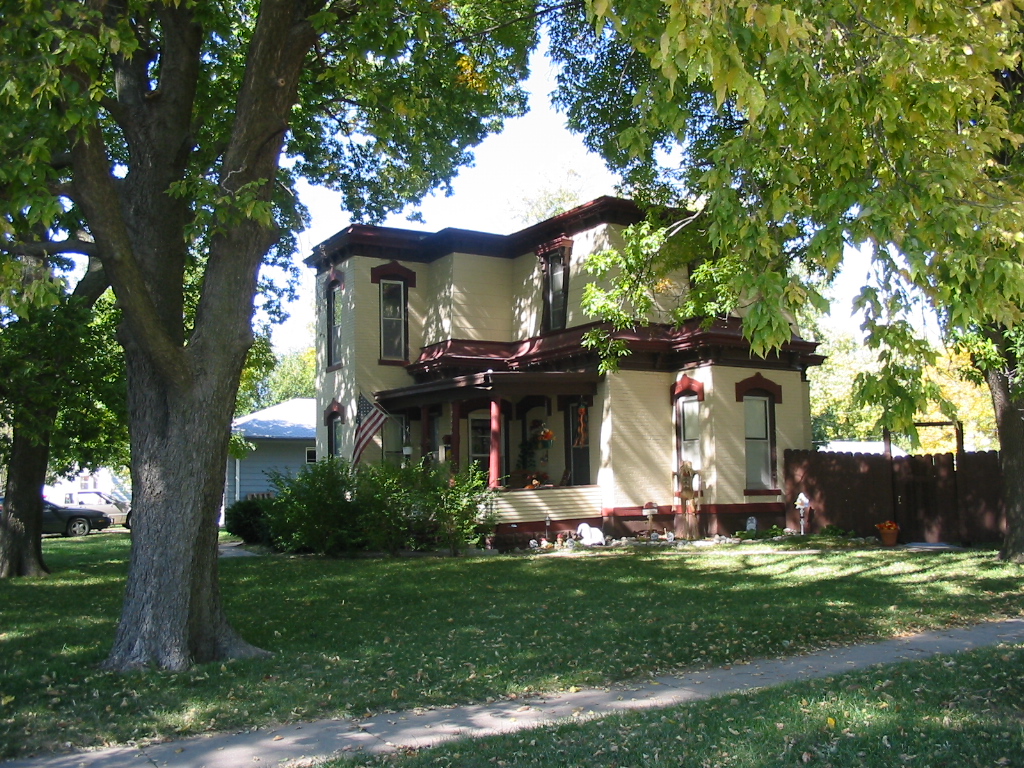 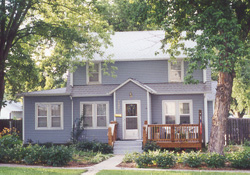 A.M. Andersen, a Danish Lutheran ministry, was the founder and first president of Trinity Seminary, the precursor to Dana College. The early seminary classes were held in this house in 1894 before Old Main on Dana hill was constructed in 1896. 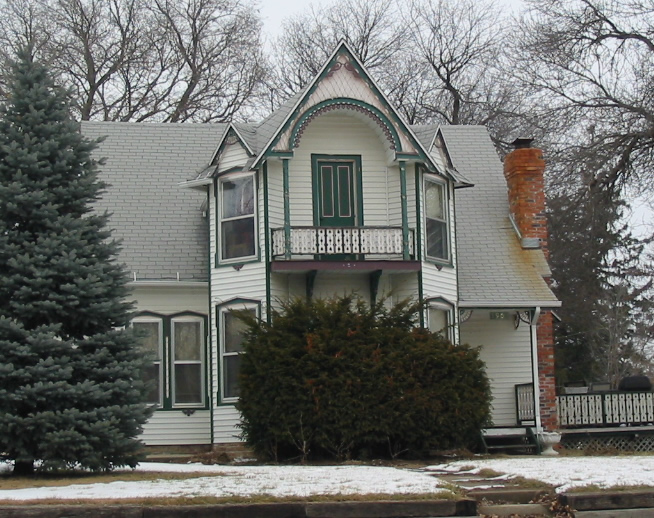 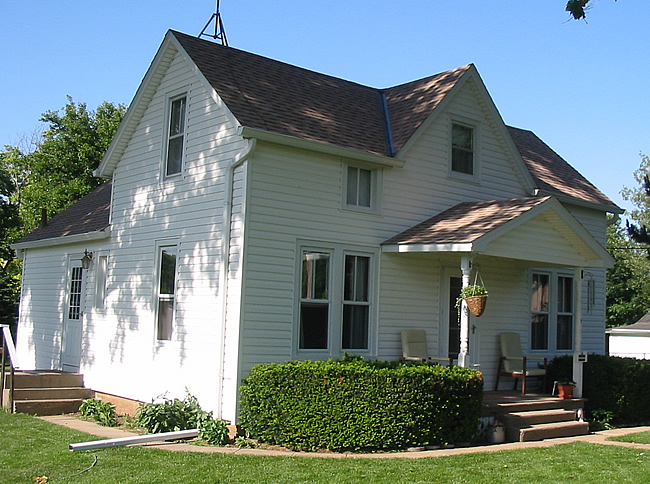 This house was known as the old Sorensen Home.