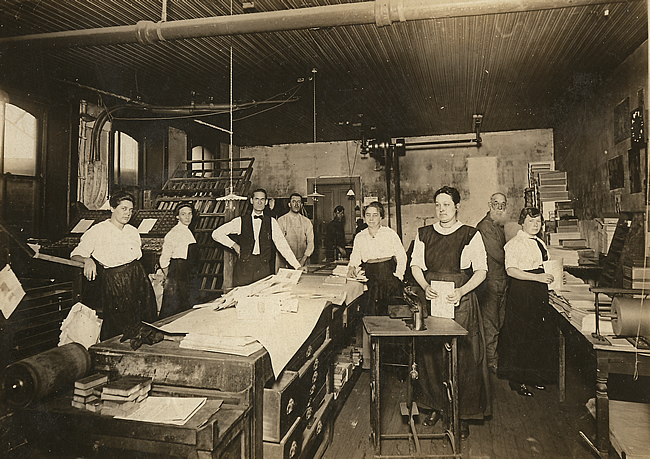 The Pilot
The Pilot was established in Tekamah, Burt County, in 1871, by J. Y. Lambert, but was removed by him to Blair in 1874. In 1875 George Sutherland purchased it, and its present publisher, L. F. Hilton, took editorial charge. In 1879 Mr. Sutherland sold his interest to the present proprietors. The Pilot is a wide awake, enterprising and influential Republican newspaper.

Blair Republican – Blair Time
The Blair Republican was established in July, 1870, as the Blair Times, by a stock company, consisting of W. H. B. Stout and other citizens of Blair. J. C. Lillie was first editor. Gen. John S. Bowen succeeded Mr. Lillie, and edited an excellent paper. After numerous changes in proprietors, and one change in politics–from the Republican to the Democratic faith–it was purchased in August, 1880, by C. B. Sprague, who changed its name to the Blair Republican, and also changed its politics to Republican. Mr. Sprague still publishes the paper.

Blair Register
The Blair Register was established in May, 1869, by Hilton & Son. On January 1, 1871, L. F. Hilton, the junior member of the firm, became editor and proprietor, publishing the paper until the following spring, having 1,200 actual subscribers in Washington, Burt and Douglas Counties. At this time the paper was suspended and the material sold under foreclosure of mortgage.

Blair Courier
The Blair Regist
“three newspapers, the Republican, the Courier and the Pilot, the latter published semi-weekly.”
page 53, Carr, Daniel, , 1903 “Men and Women of Nebraska”

The Washington County Democrat was started by Blue & Samson, September 22, 1821. On the 28th of November they removed it to Bell Creek, where after a brief struggle of five weeks it succumbed to the inevitable, and died from want of support. It was Democratic in politics, and there are comparatively few Democrats in the county. On November 8, 1881, at the State election, the Democratic candidate for Supreme Judge, W. H. Munger, received in Washington County 402 votes, while the Republican candidate, Samuel Maxwell received 1,215.

The Knocker
“A small publication called “The Knocker,” is issued from the Pilot office by Will A. Campbell, and has an extended circulation throughout the United States.”
page 53, Carr, Daniel, , 1903 “Men and Women of Nebraska”

(from Carr, Daniel, 1903 “Men and Women of Nebraska”)
One of the first papers to be published in Nebraska was started at De Soto in 1856. The was the Bugle, and its editor was Isaac Parrish.  It appears from the evidence in existence at this late day, that it was printed in Council Bluffs, Iowa, at first, and that the first paper to be printed in De Soto was the Pilot, which, in  1856, was started by Z. Jackson, as is shown by the county probate judge’s records now in the court-house in Blair, ordering that a legal notice regarding the settlement of the Coon estate ” be published in the De Soto Pilot, published by Z. Jackson,” and in the same record is a copy of the printed notice.  In various histories, and even in the article on “Territorial Journalism,” by J. Sterling Morton, published in Vol V. second series, Proceedings and Collections of the State Historical Society, this fact is overlooked, Merrick & Maguire being named as the pioneer publishers, and the name of the Enquirer given. The last-named paper was the successor of the Pilot, and was published by Merrick & Maguire until 1858, when thy bought the Nebraska Pioneer at Cumming City, and Hugh McNeeley became the editor of the Enquirer. Potter C. Sullivan, in 1858, started a paper called the Sun, which  supported De Soto for the county seat, and himself and Wm. Clancy for the Territorial legislature.  This paper, as well as the others at De Soto, was short-lived.

The Arlington Herald was started in 1882, and in 1903 absorbed the Review, which had been established in 1899.  The paper is now published under the name Review-Herald.  In 1892, the Danskeren, a semi-weekly paper in the Danish language, was established, and is still published by the Danish-Lutheran publishing House, which also issues a number of religious periodicals.

The Enterprise, which is published at Kennard, was established in 1896.

The Advertiser was started at Herman in 1899, and was succeeded in 1901 by the Free Press, which lived only a few months.

The Knocker, a monthly magazine, was started in Blair in the spring of 1902, and is still published by Will A. Campbell.