By R. J. Lippincott, from “Stories from Lippincott Farm” February, 2002 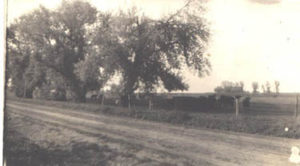 Washington Highway as it looked after grading in 1925 before it was graveled. Photo taken at Lippincott Farm.

Originally the road that passed through our farm was an Indian trail. Eventually it became a military road that ran from Fort Leavenworth in Kansas to Fort Pierre in South Dakota and finally from the Gulf of Mexico to Canada and was the major north-south route through the center of the United States. Companies of soldiers used to camp over night in our pasture, as it was a one-day march from Fort Omaha to their destination in the Dakota’s, Wyoming or Montana. When it was designated as the Washington Highway I do not know, but it was before I was born in 1912. It was identified by red, white and blue stripes, each about one foot wide, painted next to each other around telephone poles every now and then along the route. The white stripe in the center had a large “W’ painted on it in black paint which identified it as the Washington Highway.

Other major interstate highways that went through Nebraska at that time were the Abraham Lincoln, marked with an “L”, and the Detroit, Lincoln and Denver, marked “DLD”. Then there were the State highways, such as the Seward, York and Aurora, with a black “SYA” on a yellow band. From Blair to Fremont we had the B-line, which later became highway 30, and the Fontanelle, which ran from Blair to Fontanelle and now is State highway 91.

Up until 1924 all of the roads and highways here in Washington County were still dirt roads. Farmers that lived along them mostly did maintenance. Neighbors would take turns dragging a certain distance by hooking a team of horses to a harrow or to a home made drag made of planks. The County was responsible for the maintenance of the bridges, which was contracted out to the lowest bidder. Culverts were non-existent. Water simply ran over the road after a heavy rain. On the more traveled roads, dust often became inches deep during dry spells.

During the summer of 1924 our section of the highway, between Blair and Herman, was improved. Culverts were placed where the water used run over the road. An elevator grader pulled by 20 head of mules was used to build up the grade. Cuts were made through the hills and the dirt was hauled in dump wagons pulled by teams of horses or mules to build up the grade on the lower levels. During a January thaw in 1925, the ruts in the unsettled grade got so deep that it was almost impossible to get out of them. Then a cold snap came through, freezing the mud solid. I remember riding to town with my brother Clark on a Saturday morning in our model “T” Ford. It was like riding a wild bucking bronco. We were well shook up by the time we made our return ride home. The highway was graveled that summer and from then on maintenance was provided by the State.
Washington Highway as it looked after grading in 1925 before it was graveled. Photo taken at Lippincott Farm.

In 1933, our highway from Blair to Herman was completely rebuilt. A more direct route was selected, more right-of-way purchased, sharp corners eliminated, new bridges and culverts installed, ending up with a route that was almost a mile shorter. The row of box elder and cottonwood trees that that lined the highway by our place were cut down and the stumps dynamited out of the ground. The State paid us for thousands of yards of dirt when they borrowed it from our pasture across the road from our place to get dirt to build up the grade. Six culverts were placed through the road along our place when there had only been two before. The following year a 20-foot wide strip of paving 9.1 miles long was completed.

The new telephone poles placed along the highway no longer had red, white and blue bands painted on them. Numbers placed on steel post just off the shoulder of the highway had replaced them. Our highway had become U.S. 73. A few years later, when Interstate 29 was completed in Iowa replacing U.S, 75, our 73 was changed to 75 and Highway 73 became history along with George Washington. A two-foot strip of concrete was added to each side of the original paving about 20 years later. Since then it has been covered with asphalt twice and the shoulders paved.