The 1869 building would have sat on the North side of the tracks, just west of Old Walker Avenue (now 16th Street).  I was a wood frame building, possibly three stories tall.  The 1876,  “Bird’s Eye View of Blair,” shows this building and lists it as “The Blair House Hotel.”

On the 10th of March, 1869, a sale of lots at public auction was held, and the aggregate of the sales for the day amounted to $61,000 . . . . .  Hundreds of buildings were in process of construction at one.  In March the first railroad depot was built–now used as a freight house–and part of it was used as a hotel and eating house.
From:  Men & Women of Nebraska: A Book of Portraits, Washington Co., Edited by Daniel M. Carr., Progress Publishing Company, 1903.  page 50

The early railroad service in Blair dates back to February of 1869 when the Sioux City & Pacific Railroad finished a line from the Missouri River at Blair west to Fremont. (1)  In March of that year, the the Railroad completed the first passenger depot in Blair, (2)  and a part of was used as a hotel and eating-house. (3)
1History of Nebraska:  From the earliest Explorations of the Trans-Mississippi Region, by J. Sterling Morton and Albert Watkins.

2 History of the State of Nebraska;  A. T. Andreas,  1882
(It is noted that the Baptist Minister from Cuming City, the Rev. E.G. Groat, preached the first sermon ever delivered in Blair on the platform of the new depot in April 1869.) 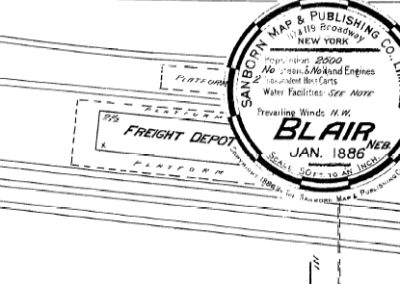 The building was used as a freight depot in 1886. 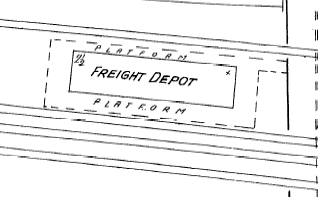 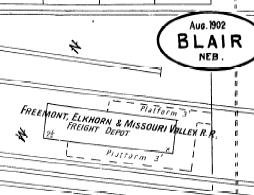