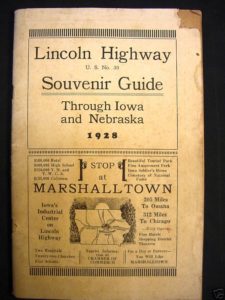 This 9 inch x 5 ¾ inch center stapled booklet is just full of information about communities along U. S. Highway No. 30, or the Lincoln Highway. There is also page after page of advertisements, many with real photos! There is an Iowa Primary Road System map inside the front cover. The Nebraska State Highway System Map is located in the centerfold. The introduction states that this was a pilot effort of the Sunbeam Press in Wood River, Nebraska and was compiled by Mrs. N. E. Presley. Only 25,000 of these were printed and distributed in this first year!