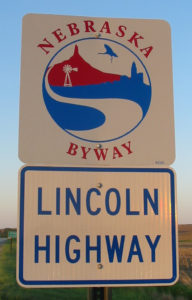 During the summer of 2006, 455 new Lincoln Highway signs featuring the Nebraska Byway logo were placed along parts of Highway 30 to mark the Lincoln Highway Scenic & Historic byway through the state of Nebraska. This was completed under the administration of the the Nebraska Department of Roads with funding from the Federal Highway Administration.

Below is a list of signs between Blair and Fremont. (Visual survey conducted May 2007 and confirmed through office of Traffic Engineering, District 2 of the NDOR.)