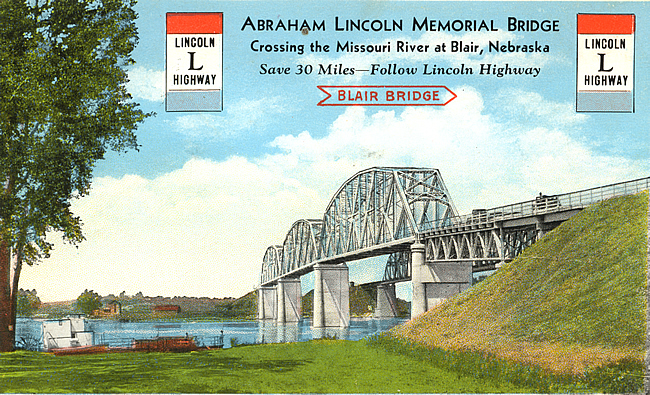 History
At the end of June, 1929, on the first day the Blair toll bridge across the Missouri River opened, 189 cars crossed it. A month later, on the day before its July 26 dedication as the Abraham Lincoln Memorial Bridge, traffic had greatly increased – 9,100 cars drove across.

Those cars, however, weren’t on the U.S. 30 we know today — which was also known at the time as the Lincoln Highway, this country’s first transcontinental road. They were on the Lincoln Highway Cut-off, and after crossing the bridge they drove from Blair to Fremont on the “B-Line,” a designation made in 1923 by the Nebraska state highway department.

Had those drivers stayed on the official Lincoln Highway, they would have driven from Missouri Valley to Council Bluffs, across the bridge to Omaha, and then to Fremont. The cut-off through Blair saved them approximately 30 miles.

Early Ferry Crossing
Earlier drivers using the cut-off before the bridge was built saved miles but not time. Even with good weather and daylight they encountered poor roads (those roads were improved, but not paved, on the Iowa and Nebraska sides while the bridge was being built), and they had to wait to cross the river by ferry. And when the river froze, the ferry couldn’t operate.

There had been sporadic agitation for a bridge at Blair over several decades, and that agitation increased after platting of the Lincoln Highway began in 1913. The community mobilized in 1925 with the threat of a new bridge at Decatur that would create a route bypassing Blair, and the Chamber of Commerce organized a committee headed by Blair attorney Reed O’Hanlon to promote a bridge. The U.S. Congress authorized its construction but provided no funds, and neither did the state.

A New Bridge
Then O’Hanlon, who became president of the Blair Chamber in 1925 and city attorney in 1927, organized a private bridge company, incorporating it in July 1927 with two major Omaha investors, as the Nebraska-Iowa Bridge Company. Congress was again petitioned, this time for a private franchise. It was granted and signed into law by President Herbert Hoover.

The corporation lined up individuals and companies to engineer and build “The New Bridge on the Lincoln Highway Cut-off,” and it actively promoted local stock sales.

Two days later, the Omaha World-Herald, in a July 25, 1930, article headed “Strong Protest as Omaha Loses Lincoln Highway” ran a rebuttal by the association’s secretary. According to the article, the secretary maintained that “Lincoln Highway was a copyrighted name. Therefore, the markers which line the highway are private property, owned by the association, and could be placed where they saw fit.” He also noted, the newspaper said, that the association only needed permission from the towns where the privately owned markers were to be placed and not from where they were removed.

The Lincoln Highway Association, formed in 1913, had officially disbanded in 1927, but influential regional and private groups remained active. As its last official act, on September 1, 1928, the association marked and dedicated the road as the Abraham Lincoln Memorial Highway. Beginning at 1 p.m., and all in one day, groups of Boy Scouts nationwide placed approximately 3,000 markers at crossroads and at intervals along the route, each with the highway’s insignia, a bronze medallion, and a directional arrow. In 1992 enthusiasts formed a new Lincoln Highway Association as a nonprofit organization dedicated to interpreting and preserving this country’s first transcontinental road.

Moving the markers placed Blair on the principal thoroughfare of the transcontinental highway. But the exact route of the highway within Blair was controversial. What street should it be on — Lincoln, South, or Washington?

The controversy was quickly resolved in 1932 when the field secretary for the Lincoln Highway Bureau made an unexpected appearance before the deadlocked City Council. The November 3, 1932, Pilot-Tribune reported that the secretary told the Council, “The present route from the bridge into Blair is unsatisfactory and has caused the bureau much worry. Until a definite route is agreed upon, the paving will not be extended from Missouri Valley to the bridge, nor from the bridge to Fremont. Our bureau naturally is much interested in securing the paving, since our object is the shortest, most direct and most scenic route from coast to coast.”

The Council acted immediately, and its November 1 minutes include this resolution: “Resolved, that the Lincoln Highway Bureau be and are hereby given the right and authority to move the Lincoln Highway thru the corporate City Limits of Blair, State of Nebraska, as follows: Said Highway shall proceed from the western terminal of the Blair Bridge to the eastern terminal of the brick paving of Washington Street, thence west on Washington Street to Third Street [now 19th] then south on Third Street to South Street, thence southwest as routed at present. . . .”

The years since this 1932 resolution have brought changes to the Blair segment of U.S. 30, with the most major change taking place in 1991 when the 1929 bridge was replaced. And few residents today refer to U.S. 30 as the Lincoln Highway – but its route through Blair remains the same.