“Even in the 1940s, Highway 30 through Blair was still know as the ‘Lincoln Highway’ by many.”

While the original Lincoln Highway passed through Omaha and Elkhorn to Fremont Nebraska, after the construction of the Abraham Lincoln Memorial Bridge at Blair in 1929, it was re-routed to U.S. 30 through Blair.

Even before the auto bridge spanning the Missouri was built, this route connected Missouri Valley, Iowa to Blair via an unreliable ferry crossing over the river. This route was called the “B-Line” — short for Blair Line. 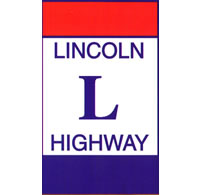 Just as the century was coming to a close, a renewed interest in the old Lincoln Highway set in motion a a revival of enthusiasts and research in the old route. in 1992, the Lincoln Highway Association was reformed, mostly as an organization dedicated to preserving the history of the highway

In 2006, the Blair History Preservation Alliance, placed a monument at a forgotten corner of the Lincoln Highway B-Line route through Blair to celebrate Blair’s late coming  role in the development of one of the nations premiere coast-to-coast highways. 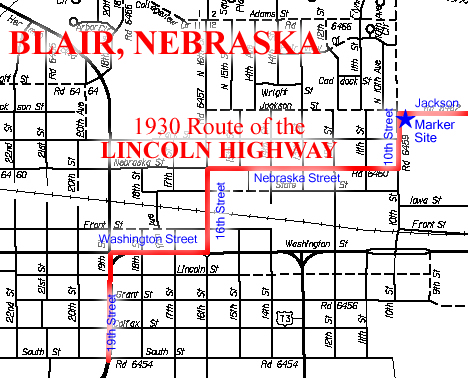 The route started at the bridge and went west down what is known to day as Jackson street, passing by the area of east Blair known as “Weimerville”, past the city cemetery and turned south a today’s 10th Street.  Heading south for two blocks, the route then turned west at Nebraska Street crossing the old North/South railroad lines of the Chicago, St. Paul, Minneapolis and Omaha line (C. St. P. M. & O)  and turned south at old Walker Avenue (today 16th Street.)  The route cross the east/west railroad lines of the Chicago & Northwestern, turned west at Washington street to go through the city’s downtown business district.  At today’s 19th street, the route turned south and headed out of town and over Barry hill towards Kennard, Arlington and Fremont to the west.

Looking Back at the Move