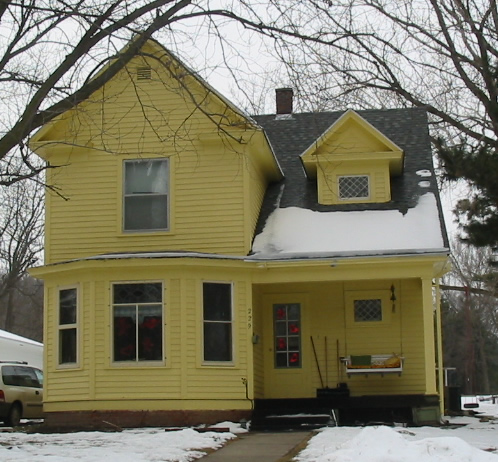 Former home of Skov Nielsen, Roger and Linda Howland, and others.

This was the Hansen-Jensen house. Currently owned by Dean and Lisa Theone.

The history of the Hansen-Jensen House

The following information is from the 1986 Nebraska Historic Buildings Survey Preliminary Inventory.
prepared by the State Historic Preservation Office of the Nebraska State Historical Society

Architectural Description
The Hansen-Jensen house is comprised of a T-shaped core with enclosed porches on each side of the rear-projecting stem. Sheathed in clapboard and constructed of wood frame dimensional lumber, the one and one-half story core is protected with a gable roof. The Hansen-Jensen house exhibits the familiar Danish use of a gable wall dormer with walkout above a main-level entry. In this case, the front porch has been removed. Other decorative features include the south-facing bay and the gable wall dormers located on the stem. A subtle yet highly Danish decorative feature are the sawtooth moldings bordering the fascia’s and purportedly hand-sawn by Johannes Jensen. Original side porches with access into the stem have now been enclosed and lack some degree of integrity. The “cross” of the T measures 8.8 m by 4.9 m and the stem measures 3.7 m by 5.0 m. The house is believed to have been constructed in 1906 and with the exception of the porch enclosures, the original plan retains it’s integrity. The plan consists of a main entry into a front room with an adjacent parlor to the north. The stem of the T located to the west then contained the kitchen. The staircase was placed behind the west parlor way and was accessed off the northwest porch, through a hall to the kitchen or via the parlor: The house is located in latitudinal orientation to the street and along with a large garage to the west, constitutes the two contributing buildings of the site.

Historical Summary
H. J. Hansen was born in Denmark in 1872. Prior to his 28th birthday, H. J. emigrated to Washington County, Nebraska and later became a citizen of the United States. In the early years, H. J. spent most of his time working on various farms and getting established. By the spring of 1906 he was able to obtain a warranty deed and later a mortgage on a lot in Blair’s Sixth Addition.

On his lot in Blair, H. J. built a house for his wife and daughter. Construction of their home was performed by Johannes Jensen and H. J. Hansen himself. It is said that H. J. would sit on the front porch during the evening and cut gingerbread boards, to be used in the decorative trim, by hand. During the early years of settlement in Blair, people who lived on the outskirts were able to build a home and still farm some on the land bordering their home. H. J. Hansen was in such a position and did practice minimal farming this way.

The H. J. Hansen family continued to live in the home until 1906 when Johannes Jensen and his wife, the daughter of H. J., obtained ownership. More recently, Elmer and Emma **Johnson lived in the home. 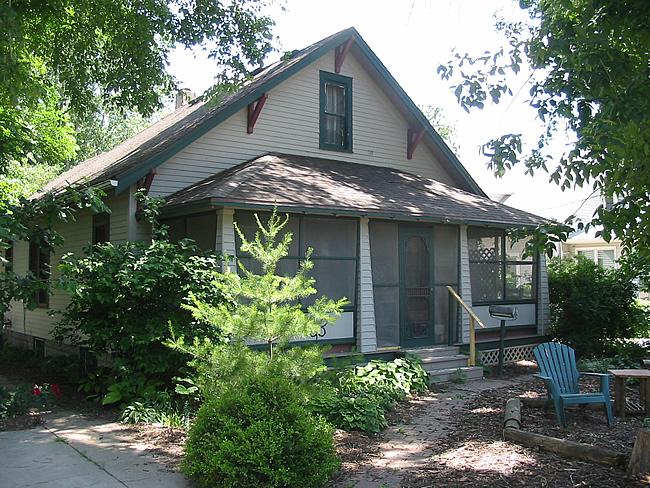 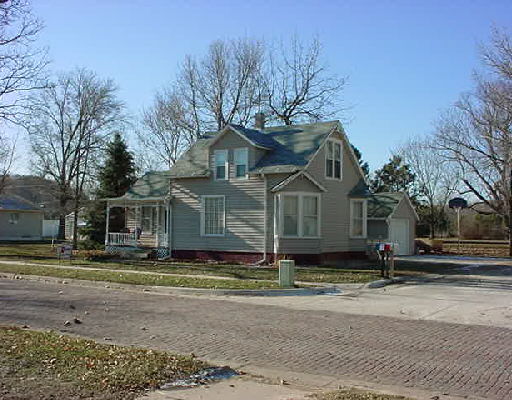 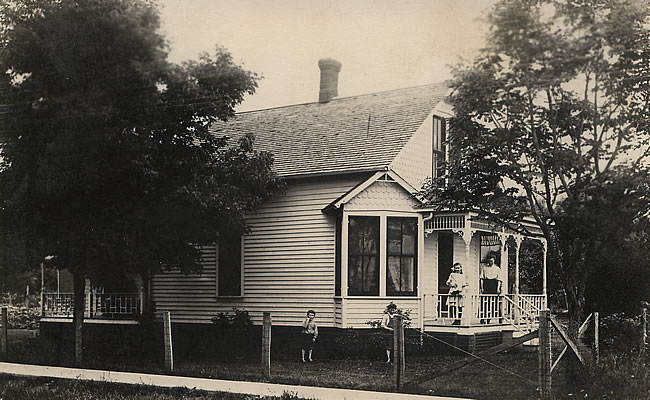 Built in 1910. The second picture may be an early photo of the house.