Occasional services were held in Blair as early as 1870, but regular services begin in April of 1882.  The cornerstone for Old St. Mary’s Episcopal Church was laid on August 10, 1882.  The church, cast in 1882, hangs know, atop the present structure.

The old church was built for $1000.  John I. Blair, for whom the town was named, was an Episcopalian, and donated the land for the church. The Reverend W. E. Jacob was the first rector, serving in 1882.
(source St. Mary’s Church Cookbook)

St. Mary’s Episcopal Church
Occasional services were held in Blair as early as 1870, but regular services with five communicants began in April 1882. Parochial organizations under the name of St. Mary’s Church was effected in June and the cornerstone laid on Aug 10, 1882. The Church was consecrated by Bishop Clarkson, for whom the Clarkson Hospital in Omaha is named.

The bell cast to the Glory of God for St. Mary’s Church in 1882 is still used to this day in our new church. The Castetters and B. F. Hallers built the first Church for $1,000.; John I Blair, for whom the town of Blair is named, was an Episcopalian and donated the land, for the church. He was a railroad-man and wanted to establish a town where the railroads were, and churches were a good drawing card for the growth of the town. Before the church was built they met in a vacant store. The Pierces were staunch supporters, Mrs. E. C. Pierce being one of the first members. In the drought – depression years Mrs. Pierce, then a widow, gave room and board to the young student priest who served the Church, so they could afford to keep going.

The Women’s Auxiliary of St. Mary’s throughout the years have held a Bazaar the first Wed. of Nov. with a delicious turkey dinner which has always been well attended. There are booths of various types selling homemade goodies, and needle work of all types, plant sales and white-elephant offerings.

A boys club was formed called Hitchman Boy’s Club in memory of young Bill Hitchman, his father having offered the boys a billiard table if they would dig out the basement under the old church. This was for all boys of any denomination. They also helped build the the Parish Hall where chaperoned dances were held for young and old alike.

Father Wm. Shattuck was the priest in charge when our present new church was built in 1967. This was a beautiful serene church, and many beautiful gifts, have been given in memory of loved ones. The stained glass window was given in memory of Father A. Marsh’s son, who was killed in World War I. He was a Chaplain. It is respectfully lighted in the lounge when coffee is served after services.

The former Ed. Mathiesen home is not the Rectory for our priests. Our Present Priest is Father Jess Hanson who comes highly recommended. Submitted by Mrs. S. Pierce Allen. 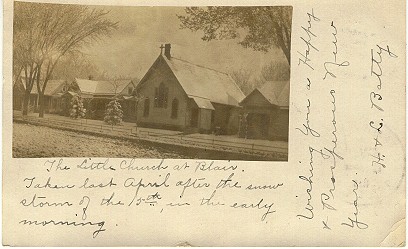 The Episcopal Church is being Plastered which is an indication that it will soon be ready for conducting services in. Blair Republican Newspaper, October 19, 1882, Page 3, Column 1 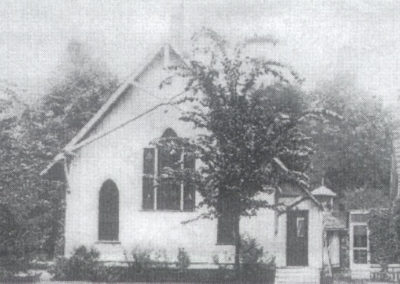